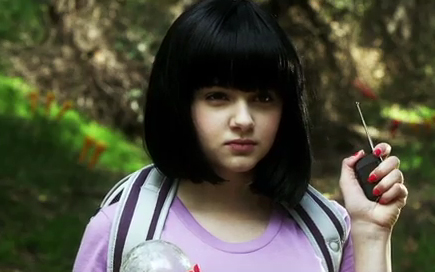 It’s so funny how there are all these kid friendly movies out right now that my son Max keeps begging me to take him to. My response is almost always the same; “That would be a great movie for you to see with Daddy!”

Since I’m the more cool and collected parent, I end up dealing with most of the tears and drama that come along with raising a 4-year-old. I feel it’s only fair in return that my husband be forced to suffer through an hour and a half of a lame cartoon where the highlight of the movie is a zebra in a clown wig singing “Afro Circus”. I’d rather be poked with needles in my eyes or handle a temper tantrum over that any day.

This morning I came across a fake movie trailer on The Huffington Post that I only wish to God was real! Dora The Explorer is brought to life in a new mock movie trailer by the comedic gurus at College Humor.

Dora, who is played by “Modern Family” star Ariel Winter as the badass explorer who with the help of her real life monkey friend Boots, a sexy bare-chested Diego and her trusty knapsack “Back Pack” (who kind of resembles a modern day Kit from Knight Rider) are sent on a mission to recover “The Infinity Orb”.

While I am well aware that this trailer is not for a real movie, it should be. I have nothing bad to say about the classic Nickelodeon version of “Dora the Explorer”, or as I like to say “Explora” for actual rhyming purposes. She babysits Max in front of the TV almost every morning while I get dressed and make breakfast. Plus he’s learned a few Spanish words in the process. Not bad for a free babysitter. I just long for the day when real kids movies spark my interest like this fake one did.

As a huge fan of Modern Family, my hats off to Ariel Winter for portraying Dora as the tough and fearless explorer that we all knew she could be. And Eric Stonestreet (Cam on “Modern Family”) if you’re listening, I think you’d make a killer SpongeBob SquarePants! I’m just sayin’. – Jill Topol