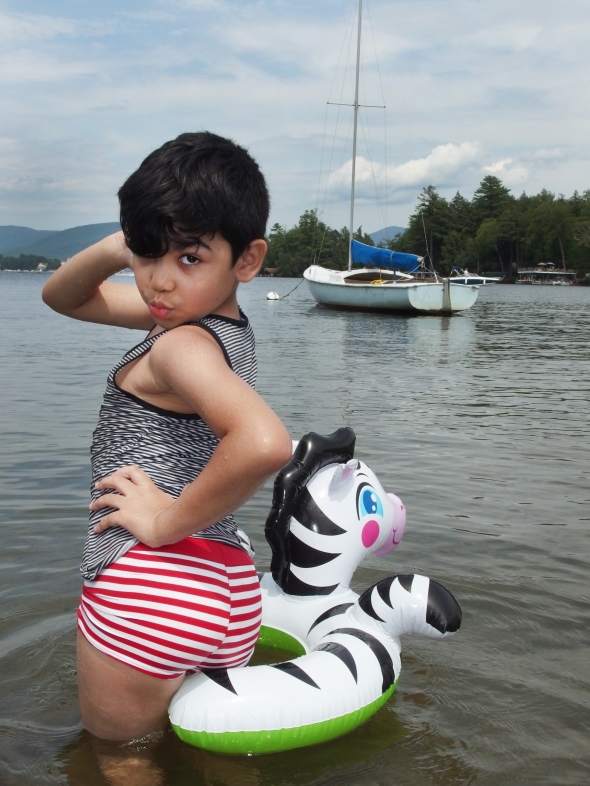 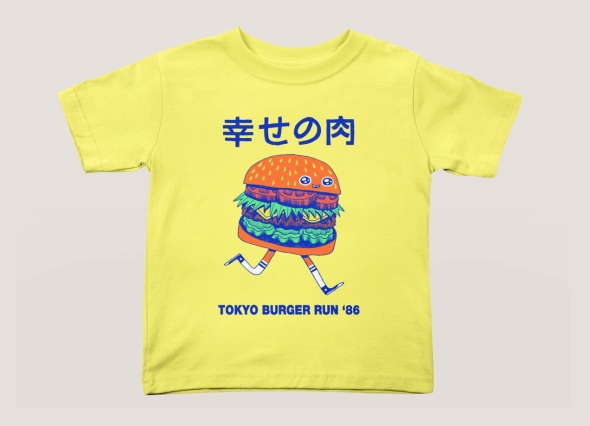 While Mother’s Day is still over 2 weeks away, today we celebrate the “mom of all moms”, Mother Earth. To pay homage to this beautiful planet we call home, it’s time to show your mama some love. Instead of buying her a bouquet of flowers, plant some in her honor. Instead of driving the kids to school, enjoy a bike ride together. Instead of tossing that water bottle in the trash, recycle it. If we all started doing something small each day to help our environment, think of the big changes we could accomplish. Your mother would be so proud of you. – Jill Topol

Words of Wisdom As Told By a 7 Year Old

For the past 2 years or so (age 5-7), I’ve been jotting down every funny and bizarre comment that comes out of my son Max’s mouth. I call them “my little gems”. And what makes these “little gems” so priceless is that they’re not said with the intent to be funny; they just naturally are. I’ll continue to be his own personal stenographer until he becomes a boring adult just like the rest of us. – Jill Topol 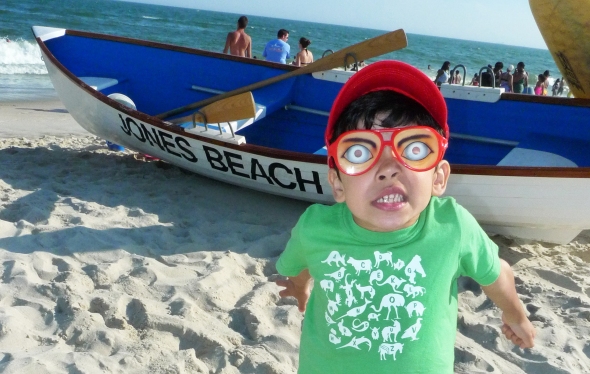 3. “Mommy, when you tell me not to do stuff it hurts my brain a little bit.”

4. Max – “I’m really good at helping baby animals.”
Me – “What do you mean?”
Max – “Like if a cheetah was chasing a baby bird, I’d give the baby bird a knife so he could defend himself.”

5. Tomorrow is Max’s 5th birthday. I told him he needs to be polite and say “thank you” for all the gifts he receives, even if he doesn’t like something. His response to me was “You mean like a suppository?”

7. “Grandma doesn’t make pancakes, but she has a delicious recipe for hotdogs.”

11. “Mommy, when you and Daddy were little were there trees?”

13. “Some kids in my class did something very inappropriate today. They twirked. But don’t worry, I think the principal saw them do it on the security cameras.”

14. “Some doctors say if you eat candy when you have rabies it makes you better.”

16. “Shut your pothole is a much better choice then saying shut up.”

17. I was watching TV with Max and this elaborate commercial with fireworks comes on for KY Jelly. Max turns to me dead serious and says “Mommy, would you like me to buy some KY for you as a present?” I told him, “That’s ok, you already got me a lovely Christmas gift, but thank you.”

19. “What if everyone in the world farted at the same time?”

21. “The Catwoman Lego is way cooler than the Wonder Woman Lego because she’s wearing mascara.”

22. Max is playing with his Catwoman doll. He rolls his R making her say “Purrrr-fect”. I try to say it, but can’t roll my R’s to save my life. His response was “Mommy, you can only roll your R’s if you’re hispanic or a cat. You’re just Jewish”.

23. “My 2 favorite animals are cats and unicorns.”

25. “What would happen if someone fell asleep on the potty while they were pooping?”

29. “Tell Grandma I’m not hungry for food, but will eat ice cream.”

30. We’re on the train heading out to visit my mom. Max breathes into his hand and smells it. I ask him what he’s doing? He says “ I want to make sure I have fresh breath for Grandma.”

32. “I need somebody to kiss, cause I’m already puckered up.”

33. Max’s cousin Violet asked to marry him. His response was “I can’t marry you because I’m already marrying my best friend Lana, but if we move to Utah I can marry you both. You can marry as many people as you want there.”

34. This past Sunday I took Max to the carnival. He won a stuffed poodle at a darts game. When I asked what his poodle’s name was he replied, “Her name is Diamond. You know, like Madonna. She only goes by one name.”

This story was originally written & published for The Huffington Post.

The Gender Bias World of Toys 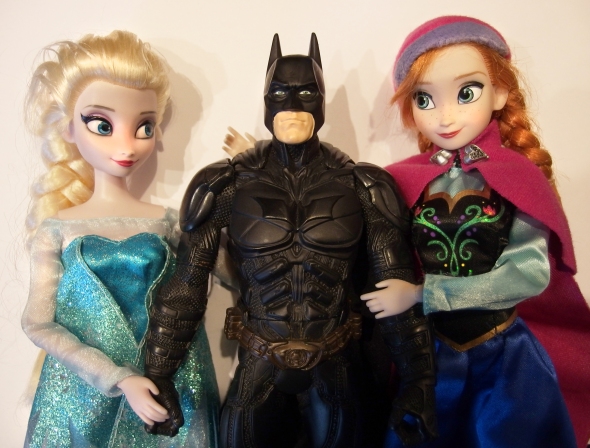 It is scientifically proven that a boy’s testicles will shrink if they pick up a Barbie and a girl will undoubtedly grow chest hair if she plays with a Batman figurine. As preposterous as this sounds, this is what our society sees when it comes to our children and acceptable playtime behavior. But who decided that pastel colors and dolls should only be enjoyed by girls, and blue and trucks by boys?

As a parent, I have Nickelodeon, The Disney Channel and a whole slew of other kids networks blasting from my TV more than I’d care to admit. One thing that is blindingly obvious during toy commercials is that you rarely ever see boys and girls playing together. Boy and girl commercials are two very separate entities, with the very rare exception of a board game or Slip and Slide commercial. How do we expect our children to broaden their creativity when the toy companies and retailers themselves are stunting their growth by dictating what toys they should play with based on gender?

Even Disney’s beloved Frozen sadly falls into the category of gender bias commercials. Almost every child in the universe (boys and girls alike) have seen and fallen in love with the movie Frozen. And who can blame them? It’s a wonderful movie. It grossed over 1 billion dollars in worldwide box office revenue, making it the highest grossing animated film of all time. But if you take a look at toy commercials for Frozen you’ll see one obvious thing missing, the boys. Why is it ok for little boys to love the movie, but not ok for them to play with the toys? I just don’t get it. It makes me really sad. We’re stifling our children’s creativity in fear of what? That they’ll turn gay if they play with an Anna and Elsa doll. You know that’s not how it works, right?

I take this whole stereotyping toys BS very personal. As the proud mother of a 7 year old boy who sees no gender when it comes to his imagination and love for toys, Frozen dolls were on the top of his holiday wish list last year. Like millions of other children, my boy couldn’t get enough of the movie and was constantly singing “Let it Go”. A ballad that for many parents became as annoying as nails on a chalkboard due to the fact our kids were belting it out from sunrise to sunset. But for me, the song always made me tear up. I’d listen to the lyrics and my heart would slowly break a little inside. This was my son’s anthem. “Conceal don’t feel, don’t let them know…Well now they know!” As “Let it Go” lyricist Kristen Anderson-Lopez explained it, “I was really excited to write an anthem that said, ‘Screw fear and shame, be yourself, be powerful,” That’s my beautiful little boy in a nutshell. A boy who makes no apologies for liking pretty things. A boy whose imagination takes him on adventures we only wish we could experience in real life. A boy who’s been called “Barbie” by bullies in an attempt to make him cry (and failed). A boy who stands up for himself on a daily basis at school because his peers don’t understand why he likes “girl” toys. Well whoever taught these kids that these were “girl” toys? Why can’t they just be TOYS!

It’s time we realize that toys don’t have a gender. We assign it to them.

My child’s story is far from an isolated case. There are tons and tons of children out there who like toys originally created with the opposite sex in mind. The problem is that many kids are afraid and embarrassed of the repercussions if exposed. A boy who only feels secure playing with his Hello Kitty doll in the privacy of his own bedroom because he’s ashamed someone might see him. A little girl who’s turned her locked bathroom into Spiderman’s lair because she’s worried her brother will tease her if she’s caught playing with the web slinger. Playtime should be a joyous time for our children. They shouldn’t feel worried that making the “wrong” toy selection based on their gender might get them teased or bullied. Or are we a society so narrow-minded that we really do believe a boy should only stick to sports, super heroes and bloodshed and girls are better suited for shopping, beauty and tiaras. This is the same type of mentality that says “A woman’s place is in the home”.

Instructions from a 1973 Lego set has recently made news reminding us of the beauty of gender equality through play. It also shows that over the last 40 years we have sadly taken a step backwards. (Pardon the grammatical errors. This was translated from a German Lego toy set)

The urge to create is equally strong in all children. Boys and girls. It’s imagination that counts. Not skill. You build whatever comes into your head, the way you want it. A bed or a truck. A dolls house or a spaceship. A lot of boys like doll houses. They’re more human than spaceships. A lot of girls prefer spaceships. They’re more exciting than dolls houses. The most important thing is to put the right material in their hands and let them create whatever appeals to them. – Lego

And let’s not forget Marlo Thomas’ 1972 ground-breaking film Free To Be… You And Me. Teaching children (and parents) the concept of gender equality and finding acceptance within. The song and video for “William’s Doll” (the story of a boy longing for a doll) is still as meaningful today as it was 40 years ago.

While companies like Toys R Us are still segregating the boys from the girls into different sections of their brick and mortar and online stores; making it virtually impossible for a child to feel comfortable shopping outside of what’s expected of them, there are companies trying to make a difference.

Back in 2011, London’s historic Hamleys (the world’s oldest toy store) took steps towards gender equality by taking down their pink and blue signage and replacing it with floors divided into themes. A year later Harrods followed suit by creating their own 26,000 square foot gender-neutral toy department called “Toy Kingdom” which is also divided into themes, rather than sex. Hopefully this is just the very beginning of a new trend on how we view toys.

While I’m not saying every little boy should drop their race car in exchange for a princess;
I long for the day when Cinderella can hop into a Hot Wheels and drive off into the sunset…AND IT WILL BE NO BIG DEAL. – Jill Topol