Dolls Without Makeup by Nickolay Lamm

I would like to start off by saying that I am not a prude! I think if you’ve got a great set of legs, short shorts are hot. Stiletto heels are sexy, and strawberry lip gloss makes for a more enjoyable kiss. But even with having an appreciation for makeup, I never quite understood why some doll manufacturers have decided to take their makeup inspiration from Tammy Faye Baker? When I was a kid my idea of makeup consisted of a Dr. Pepper flavored lip balm and glitter nail polish. Now it’s not uncommon to see a 13 year old looking like she was just abducted by the Avon lady.

While I love the idea of little girls playing dress up and messing with their mom’s makeup, I think it’s important that we don’t rush them through childhood. Don’t get me wrong. Makeup is a godsend. The thought of leaving my apartment without a little concealer and lip gloss would leave me feeling naked (and a bit haggard). It’s sad to think that a little girl might feel the same as me because they want to look like their doll.

I recently had the pleasure of speaking with researcher and artist Nickolay Lamm, who took photos of Barbies, Princesses and Bratz dolls and digitally removed their makeup. The end results were more youthful looking fresh faces, similar to the children who play with them.

Now that we know Barbie is still beautiful after washing her face, it’s time to move onto the next important doll topic that’s on all our minds. Why the ginormous boobs? – Jill Topol 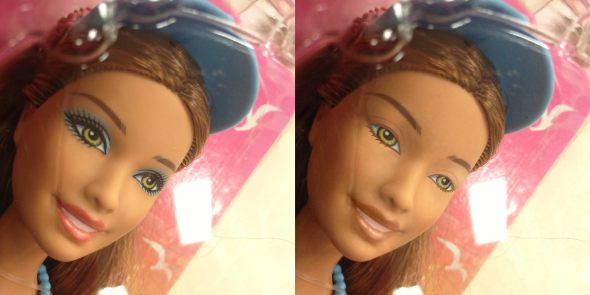 Super Goody Bag: What was your inspiration for this project?

Nickolay Lamm:  I came across a viral “before and after” photo of Barbie where they over exaggerated the whole portrayal of Barbie without makeup. She looked horrible. I thought I could do a better, more realistic job.

Super Goody Bag: Why do you think toy companies have always felt the need to over exaggerate the features on dolls? From Barbie’s 10-inch waist topped off with double D breasts and heavy makeup?

Nickolay Lamm: It’s kind of the same idea as skinny models in advertisements. Beautiful people tend to sell products better. However I feel there’s a movement where we’re now more aware of this unrealism and are much more willing to buy dolls that actually resemble real people.

Super Goody Bag: Do you think manufacturers will take note and ease up on the makeup after seeing your images?

Nickolay Lamm: Hmmm… I don’t know? But I’m sure someone at Mattel probably saw my images, and hopefully I planted a seed in their mind that clean fresh-faced dolls are still pretty and marketable. I think a lot of parents would buy a doll without makeup if it actually existed.

Super Goody Bag: I actually like some of your “after” images better, but I’m not namin’ names. Hello toy companies! I love you all! lol The dolls look beautiful. The only thing missing are the teenage zits, but I think maybe that’s where we should draw the line on realistic dolls, unless of course Proactiv and Clearasil want to come out with their own line of “welcome to puberty” dolls.

Super Goody Bag: Do you think Ken and GI Joe would approve of these new makeup free dolls, or miss their overly done-up girlfriends?

Nickolay Lamm: I don’t see why not? I myself am no Ken or GI Joe in real life, but I don’t care if a woman wears makeup or not. They’re all beautiful.

Super Goody Bag: Did you play with dolls as a kid?

Nickolay Lamm: I played with something similar to GI Joe growing up, but I think girls tend to be more affected by dolls with makeup than boys. There’s much more social pressure on little girls with how they look.  It’s socially acceptable for little boys to be messy and not care about their appearance.

Super Goody Bag: What’s your next project from here?

Nickolay Lamm: A 3-D model of Barbie side by side to a real woman doing comparisons on all their body measurements. The front page of Yahoo picked up the story a few days ago.

Super Goody Bag: Who would win in a fight, Barbie or a Bratz doll?

Nickolay Lamm: Oh the Bratz doll would win. Her head is so big that she would knockout Barbie with one headbutt!

To check out more of Nickolay Lamm’s work go to MyVoucherCodes.co.uk and nickolaylamm.com